What a Difference an Hour Can Make 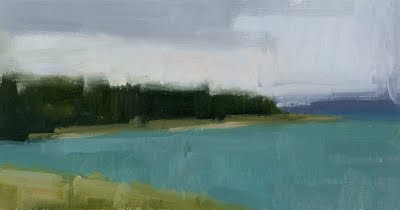 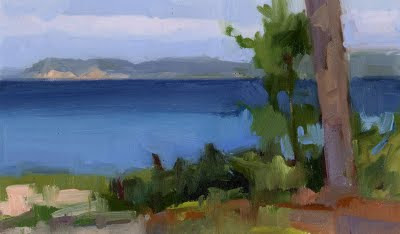 Am back in Grand Rapids again after being gone for the last ten days painting at Sleeping Bear National Lakeshore. I can't believe how quickly the time flew by. And its amazing how much painting & foundational work one can get done when there are no distractions, unless you count knitting as a distraction. Though in defense of the knitting, I did manage to knit a hat and 3/4 of a sock. The two paintings I am posting were completed on Sunday, September 27, before and during the shift from summer-like weather to more appropriate fall weather.
The wind was starting to pick up a bit and the black flies were starting to become a bit fierce as I was completing the painting shown here with the pine trunk. By then, friends & fellow painters Joe and Carol Spaulding had called it a day and headed for home. I started to pack everything up and head in that direction as well, but decided to take a detour to where the-county-road-ends-at-edge-of-the-water. (yes, the sign says that) The atmosphere was so  juicy with the approaching cold front I couldn't resist popping the hatch open and standing under the lift gate and knocking off a little painting. As an aside, I wasn't the only one to take refuge in my car. While I was painting, apparently a swarm of black flies decided that my car was a great refuge from the wind and the rain as well. By the time I packed it all in, there were at least 100 flies, who took me days of swatting and driving with the windows down really fast to rid my car of.
Posted by Margo Burian at 6:28 AM

Hi Margo: My dog Cody and I were at the end of County Road 669 when you arrived to paint on Sunday, September 27. We were in Traverse City for an agility dog show and took a ride to "the" beach. "My" beach is actually further up the shore.

I used to rent a cottage along the shore, however, a couple of years ago the government took back the property and leveled the cottage. Every chance I get, which seems to be about once a year, I return to "my" beach with my dogs.

I enjoyed meeting you that day. The painting looks great. I would like to send you a photo of "my" beach but don't see any way to do it here.

Please note, we also returned home with a few flies that didn't want to leave the warmth of the car.

Hi Barbara-
Glad you found me here. :)
And there as well. Was the cottage further north? Or closer to Shalda Creek? I noticed there was some property for sale just a shade north on the dirt road, which I thought was odd, as I'd been under the impression that was all National Park.

That particular beach is really one of my favorite places to paint. You must have some wonderful memories of time spent there as well. I quite often take my Bodhi there when we need some serious dog time. He is a bit of a distraction when one is painting though.

If you like, send the photo along to m.burian@comcast.net

Great to meet you as well.

Margo,
I just made it to your blog..it's great. And these two paintings are spectacular...bummer about the flies! I was chewed on by some of those this summer in Glen Arbor too...misery!
Angela